The first child born in Fort Korvosa, Alika Epakena also bears distinction as the first person of Varisian blood to receive citizenship in the Empire of Cheliax (awarded posthumously). Blessed with the gift of Pharasma and trained in Harrow reading, Alika became instrumental in guarding the fledgling community from surprise Shoanti raids. She foresaw the Great Fire of 4429, and, despite seeing her own death in it, she led the efforts of combating the flames and finding the Shoanti responsible for setting it. She was proclaimed a saint by the Church of Pharasma and is memorialized in multiple locations within Korvosa.

Saint Alika appeared to Ashla in a vision, warning her that the true Immortal Lord Volshyenek Ornelos had died 200 years ago and whoever was posing as him now was beyond Pharasma’s sight. 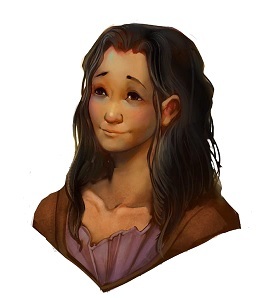