Formerly a richly dressed Chelish man with stark features, a dark goatee, and hair graying at the temples, Amprei has undergone some changes since the party first encountered her…

The Chelaxian Ambassador to Korvosa, Amprei had concocted a plot to sabotage the city’s relationship with Cheliax and use the ensuing economic chaos to increase his power over the city. Unfortunately, he was also conducting an illicit love affair with the wife of an influential Chelaxian noble.

When several scandalous letters from the young woman fell into the hands of Devargo Barvasi, the King of Spiders blackmailed the ambassador for weeks before trading the last two letters to the party, who promptly turned them over to the Korvosan Guard.

With this new leverage, Ambassador Amprei’s plot was swiftly squashed. But his scheming continued.

Amprei’s residence sits over a Vault with a Thassilonian teleport circle linked to a smuggler’s cave in Old Dock. He used the circle to help the Bekyars with their underground slaving operation, which Ionas “Slim” Tils stumbled upon while trying to escape the quarantine of Old Korvosa with Kyra and her mother Yamyra. The ambassador claims that the arrangement has nothing to do with Korvosa and is simply a means of advancing Chelaxian interests in Garund.

Amprei forced Slim, the halflings, and the paladin Ser Irabeth of Lastwall to swear that they would keep his dealings secret and the ambassador also revealed his knowledge of Slim’s personal history.

Amprei subsequently permitted the party to use the Thassilonian teleport circle beneath his home to covertly enter Old Korvosa, on the condition that Slim procure the medallion for him.

After Slim fled the city, he found a letter from the ambassador waiting for him in Harse instructing him to meet with Amprei’s agent Raven in Kaer Maga to hand over the medallion. Slim soon realized that someone, probably Amprei, had been scrying on him.

After the meeting with Raven fell through, Slim had a letter dispatched to Field Marshal Cressida Kroft detailing the ambassador’s misdeeds, with evidence.

The party has since learned that Amprei was expelled from Korvosa due to these revelations.

However, the ambassador’s quest to acquire the medallion did not end there: he dispatched the mercenary Aquilos Nox to recover the item.

The ambassador, through his agent Freya Mikkelsdotter, has struck a bargain with Nox to restore the man’s family title in exchange for the medallion and to forge documents naming him a Royal Adjudicator to Korvosa in return for unfettered access to the vaults below the castle (and possible assistance accessing those vaults).

Ambassador Amprei has recently returned to the Chelaxian Embassy in Korvosa, in the midst of the uprising against the Queen.

Nox and the Ambassador teamed up to use the medallion to access Sorshen’s vault below Castle Korvosa, so that Amprei could perform a ritual to siphon off power from the sleeping Runelord and leave her quiescent for another age. Nox betrayed Amprei and the arrival of the Crimson Blades caused the ritual to go awry.

With his plan in shambles, Amprei tried to escape, but was slain by a finger of death from Egan.

Freya later contacted Nox to claim that she had received a letter from Amprei urging her to meet him at the Breaching Festival. Nox encouraged her to follow up on the letter.

The party encountered Amprei in Headmaster Ornelos’ office, discovering that due to a magical mishap the scheming wizard had been revived in the body of Sorshen. Now unrecognizable, Amprei has lost all of her connections and influence and has been relying on the dubious charity of Ornelos to get by.

Amprei joined the party in their assault on Ornelos Manor, teleporting them in during their first incursion and then evacuating the Ornelos children. She then teleported them back again and became caught up in their fight with Lorthact. 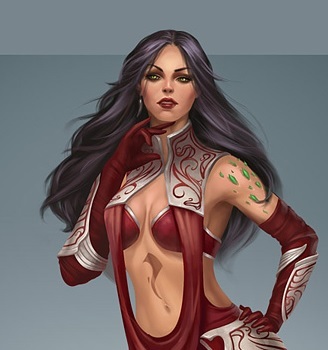