A lithe and attractive woman with bright red hair and an unsettling smile, wearing little more than chains that sprout from her body

A Kyton, or chain devil, who serves as a bodyguard and companion to Shadowcount Sial, she is a fiend of few words.

Sial and Asyra assisted the party during the Red Mantis ambush at the Acropolis.

The chain devil joined the est of the Brotherhood of Bones in partnering with the party during their sojourn into Castle Scarwall. During the battle at the castle gate, she demonstrated an uncanny ability to manipulate the chains of a portcullis.

After her master Sial was forced to accept the role as Curate of Scarwall’s Star Tower, Asyra gleefully left with him for the Plane of Shadow, muttering “Finally” as they departed. 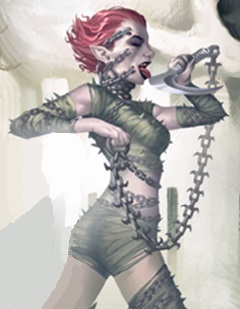