An Erinyes General in service to Eiseth

This angelic being appeared during the ritual to free Nox of the taint of evil. She revealed that Lorthact has gotten a hold on his soul, one that will remain until the infernal duke is destroyed.

She warned that Lorthact was systematically sealing off the city to the outer planes. She asked Nox to place her token, in secret, on someone, to serve as a toehold that will allow her to enter the city through the barrier. Nox agreed, and secretly stowed it away in Remmy’s armor.

After receiving a warning from Ramara, Nox learned that Azeret is no servant of Pharasma as he had believed. Research by Amprei revealed that she is in fact an Erinyes general in service to Lorthact’s old enemy the Whore-Queen Eiseth.

Azeret manifested during the battle with Lorthact, using Remmy as her vessel. She shielded the party from the infernal duke’s worst spells. 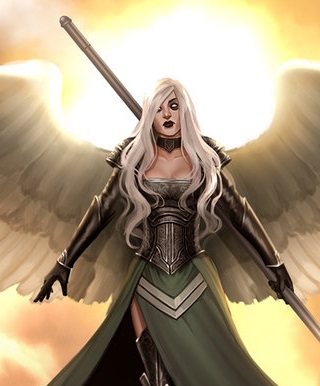