One of several orphan girls that Arlynn narrowly rescued from conscription into the Gray Maidens. Chammady lost her parents to outlaws at a young age and spent her childhood at various orphanages in Korvosa. She drifted through life until Arlynn began appearing at the orphanage to check up on the children and spread the word of Iomedae.

Reading through the Acts, the young woman quickly connected the goddess to her own miraculous survival after the violent mugging. She dedicated herself to studying swordcraft and the teachings of the Inheritor, dreaming of following in Arlynn’s footsteps as a champion of the goddess.

As a recent convert to the faith, Chammady tends to be a bit overzealous in her adherence to Iomedae’s teachings. She has also taken it upon herself to act as a sort of sergeant for Arlynn’s other sworn swords.

Arlynn recently petitioned the goddess to bless Chammady with the powers of a paladin. This request was granted, to the young woman’s amazement and joy. 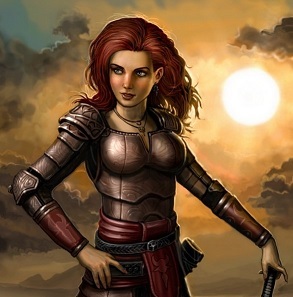