Armed with a "sideways screaming bow," this strange being has stalked the Cinderlands for several years hunting lone Shoanti braves

For several decades, the Cinderlander had prowled the Storval Plateau, hunting lone Shoanti braves and leaving behind grisly tokens: the severed heads of his victims, mounted on sticks with crossbow bolts rammed through their eyes.

Many legends developed around the Cinderlander, who was also known to the Shoanti as “the devil tshamek”.

The Crimson Blades finally encountered the Cinderlander during the Battle of the Flameford, where he was working with the Red Mantis Assassins to terminate the adventurers. 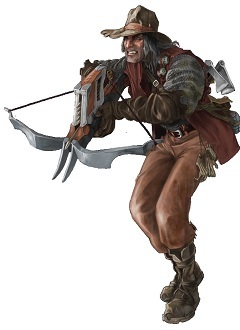