The eldest son of Lord and Lady Totham, Cohel always doted on his younger sister Felyse Totham. The Totham’s were relatively newly ennobled and came to Korvosa with Queen Domina, hoping for more opportunity for advancement on the frontier. They have poured themselves into military studies, focusing on the Korvosan navy, but are still building connections with the established houses.

Cohel was enraged when he learned that Lord Telus “Flint” Endrin had misled and insulted his sister, proposing marriage to her and two others simultaneously. He arrived at Endrin Manor determined to either kill Flint or force him to carry through with the marriage. he was only convinced of Flint’s “clones” story when staring at the corpse of one of the duplicates. 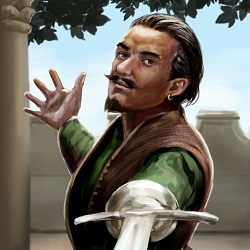