A young noble with dark hair, high cheekbones, and a frown of determination

The youngest son of Lord and Lady Forscythe, he is a longtime friend of Flint.

Lady Forscythe reported that he has gone missing after being seen conversion with Flint, who hasn’t spoken to him in weeks.

According to Sheira, Damon was part of the ill-fated expedition into the vaults. She thinks he was captured by the snake creature that ambushed them.

In truth, Damon managed to talk a younger medusa into sparing him from her mother’s wrath. Damon is rescued from her clutches by the party, much to his relief. Despite some initial misgivings, he and Flint have reforged their friendship.

Flint, aware of Damon’s feelings for his sister Valeria, arranged a meeting between the two of them. Although the moment was interrupted by one of Flint’s clones, the two seem to have hit it off. 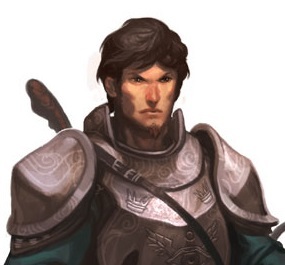