A Chelish man in his mid-40s with a fatherly demeanor

A talented physician, he served Queen Ileosa’s family in the Chelaxian capital of Egorian. After the plague outbreak, Ileosa requested his assistance and arranged to magically transport him to Korvosa.

Dr. Davaulus has assembled a group of the city’s most talented healers, dubbed the Queen’s Physicians, to try to control the outbreak.

Evidence the party discovered aboard the wreck of the Direption indicates that Davaulus may have had a direct role in bringing the ship, and perhaps the plague itself, into Korvosa.

After infiltrating the Hospice of the Blessed Maiden, the party defeated and captured the “good doctor” and found evidence confirming that he was behind the plague and was conducting cruel experiments on Varisians resistant to it.

Davaulus was executed after confessing to the plague conspiracy and insisting he was acting only to strengthen Korvosa. 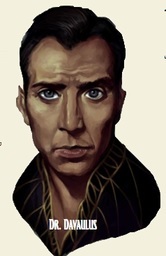