An elderly man of generous spirit and insatiate appetites

The late king of Korvosa, he was the only son of Queen Dominia and was a grown man when she first took the Crimson Throne.

Eodred’s reign was marked by an expansive (and expensive) public works campaign, a successful military campaign in the Bloodsworn Vale to the south, and overall stability (some say stagnation). Eodred was a man of many pleasures, chief of which were women, and he maintained a personal harem for many years.

That all changed two years ago, when a young woman from a Chelaxian noble house—Ileosa Artanxi—came to Korvosa and quickly caught the king’s eye. Captivated by her beauty and determined to finally sire an heir, Eodred married her after a brief courtship. Although he disbanded his harem, some say the king’s eye still wandered, much to Queen Ileosa’s displeasure.

In the last weeks of his life, King Eodred’s health went into steep decline. Despite this, he persisted in having an official portrait painted by the lovely Trinia Sabor.

Eodred’s sudden death set off waves of riots and instability across Korvosa that have only begun to subside. Now, allegations have surfaced that he was the victim of foul play, perhaps at the hands of Trinia.

Although the young artist was tried and convicted of his murder, the party (and many others) believe the girl to be innocent. 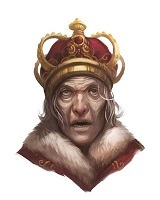