Younger brother to the late Commandant Marcus Thalassinus Endrin, Flint was recruited by Nox to help overthrow the Queen, with the promise of elevation for his family to Great House status and his own installment as Commandant of a re-formed Sable Company.

Flint participated in the uprising against Queen Ileosa, including storming the castle, despite the fact that his sister Valeria was numbered among the loyalist Gray Maidens. He drew cards from the Harrow Deck of Many Things, but unlike many other party members did not see immediate effects from his draw.

In an ensuing boggard attack on the city, Flint’s parents perished defending East Shore, leaving him as the new Lord of House Endrin. After learning of this disaster, Flint joined the Crimson Blades in attacking the Queen’s lair in the Sunken Queen.

Flint has since returned to Korvosa, where he and Valeria have somewhat reconciled. Most recently, however, Flint discovered the existence of at least one exact duplicate of himself stalking the city. While the impostor has been detained for the moment, the news leaves him thinking back on his Harrow card draws.

Flint has subsequently discovered that one of his duplicates has been murdering messenger birds bearing dire news from the frontier, while another has gone around ruining his reputation, while a third has taken up with a strange half-elf woman and led Flint’s friends into danger in the Thassilonian Vault below Castle Korvosa. The bird-killer is dead, murdered by a spurned fiance, while the wastrel was slain by Flint himself.

Flint rescued his friends from the vault and has regained their confidence. The other duplicate and his half-elf accomplice remain at large.

Flint was slain by the infernal duke Lorthact during the final battle in Ornelos Manor. 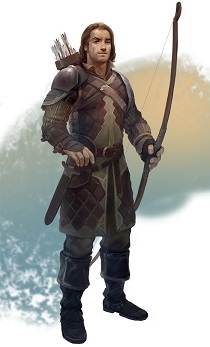