Shot to death by his exact double

Younger brother to the late Commandant Marcus Thalassinus Endrin, Flint claims to have been abducted by a powerful fiend and replaced with one or more duplicates. After escaping from the fiend’s clutches, he brought his allegations first to his sister Valeria and then to Cressida Kroft.

Flint discovered that an exact duplicate of himself was traveling with the Crimson Blades. After a tense meeting, both the authorities and his sister sided with the duplicate, and Flint was led away in chains.

Despite this, Flint miraculously talked his way out of the cell in less than a day and began drinking, gambling, and whoring his way through every seedy dive in the city, taking a break now and then to offer marriage proposals to almost every eligible lady in Korvosa.

Fate ultimately caught up with Flint, when his double and Ashla tracked him down to the Jade Circle. He attempted to flee, but was shot down by his double. His body was taken back to Endrin Manor, where it was stored alongside that of another duplicate. 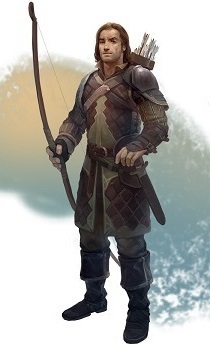