A slave for sale in Kaer Maga, Slim won her freedom from a Katapeshi merchant and asked her to be his apprentice.

Freya was subsequently slain by Lord Aquilos Nox on orders from Ambassador Darvayne Gios Amprei—or so the party believed for weeks. In truth, she was an agent of Amprei all along, working with Lord Aquilos Nox to track down Slim.

Freya served as Nox’s intermediary with Amprei, to whom she had sworn an oath of loyalty. She was compelled to break that oath when Nox used the Crown of Fangs to dominate her into revealing the ambassador’s secret hideaway aboard the ship the Burnt Saffron. The dominated Freya then accompanied Nox and Amprei into the Thassilonian vault below the castle, where Nox deliberately kept her out of danger.

After she was released from his power, Freya was furious with Nox for his betrayal, but feelings between the two of them seem to have improved recently. 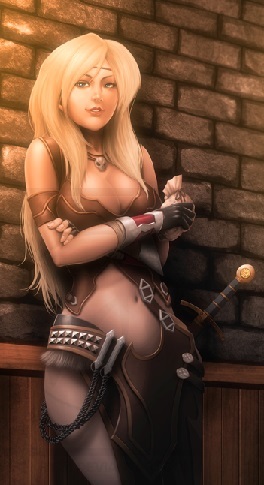