A breathtakingly beautiful young woman with hair red like the sunset

A flame-haired young woman of such rare beauty that some speculate she must have a nymph in the family tree, Ileosa was born into a minor Chelaxian noble family. She made her way to Korvosa at age sixteen and quickly caught the attention of King Eodred, who after a lifetime of womanizing was finally searching for a suitable wife to bear his heirs.

In short order, they were married, but the role of Queen-Consort did not sit well with Ileosa. She was openly contemptuous of Korvosa as a provincial backwater and her husband’s continued (and often public) philandering clearly grated on her. Yet as the old king’s health suddenly began to fail, it became clear that the Crimson Throne (and its supposed Curse) would soon pass to the young queen.

The day after her husband’s death, the party returned a stolen brooch to the freshly-widowed Ileosa and she urged them to assist the Korvosan Guard in restoring order.

The party foiled a clumsy assassination attempt during her coronation ceremony several weeks later. After the fiasco, the Queen and her bodyguard Sabina Merrin announced that she would be forming her own personal guard, an all-women unit drawn from the ranks of the Korvosan Guard and Sable Company.

A few weeks after King Eodred’s death, Queen Ileosa announced that her husband had been murdered and the chief suspect was his portraitist, Trinia Sabor. She had the girl held, interrogated, and tried within the walls of Castle Korvosa. The verdict was guilty, the sentence was death, and the process was most irregular.

Ileosa threw an execution party in the public courtyard of Castle Korvosa, inviting anyone who was anyone to attend and offering up Trinia’s life as a salve for the city’s many ills. Her staged spectacle was interrupted by the arrival of the folk hero Blackjack, who thwarted the execution and escaped with Trinia (thanks to the surreptitious help of the party). After the bungled execution, Queen Ileosa retreated back into the Castle and has not been seen in public since.

After the Blood Veil outbreak began, Ileosa sought aid from Dr. Reiner Davaulus, a master healer and old friend of her family in Cheliax. She issued edicts placing Dr. Davaulus and the Queen’s Physicians in charge of the city’s fight against the plague, with the full support of the Gray Maidens, the Guard, and Sable Company.

The Queen’s latest edict has placed Old Korvosa under a strict quarantine, allowing none to enter or exit.

Lady Andaisin, head of the Urgathoan cult that helped devise the plague, claimed to be acting on the Queen’s instruction, but the party was unable to find any corroborating evidence.

Queen Ileosa grudgingly declared the party the Saviors of Korvosa, but during that same ceremony she also decreed the disbanding of Sable Company and appointed her ally Togomor as the new Seneschal, breaking two hundred years of tradition. An enraged Marcus Endrin fired a crossbow bolt into her head—which she removed and jammed into his skull, her own wound swiftly closing up. The Queen was notably wearing an ugly new crown featuring horns or fangs.

Neolandis Kalepopolis subsequently confirmed the party’s suspicions that the crown is a malevolent artifact, possibly created from something the Shoanti called “Midnight’s Teeth.” Neolandis believes the artifact’s influence explains the Queen’s shift in personality from spoiled noble to murderous tyrant.

Agents of the Queen are purportedly hunting for the party, and she may have gained a new ally in Lady Vimanda Arkona.

After infiltrating Castle Korvosa, the adventurers thought they had cornered Ileosa in the throne room, but when Arlynn cut down the Queen in front of the Crimson Throne they discovered that they had merely slain a simulacrum made of blood. The true Ileosa remains at large.

The Crimson Blades have learned that Ileosa intends to use an ancient artifact called the Everdawn Pool within the Thassilonian ruin known as the Sunken Queen to perform a vile ritual off blood magic in order to obtain immortality by sacrificing many innocents in Korvosa.

Scurrilous rumors have long claimed that Ileosa and her handmaiden & bodyguard Sabina Merrin are secretly pursuing an inappropriate relationship. Rumors that Neolandis confirmed are true, saying that the Queen has Sabina hanging on her every word. After her defection, a rueful Sabina admitted that she acted out of devotion to Ileosa, but now wonders whether the Queen ever truly cared for her. Within the castle, the party discovered a secret passage between Sabina’s spartan chambers and the royal bedroom.

The party’s subsequent discovery of Ileosa’s diary has confirmed many details about the Queen, including the fact that her feelings towards Sabina were completely genuine. 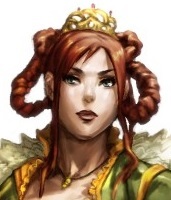