A tall half-orc woman with short-cut hair, broad shoulders, a steely determination in her hazel eyes

A Paladin of Iomedae stationed in the besieged realm of Lastwall, Irabeth was captured by orcs during a border skirmish. After a stay in the Hold of Belkzen, she was brought to the slave markets of Kaer Maga, where she was bought by Bekyar slavers who took her south.

She ended up in a hidden stockade within the wine cellar of the Chelaxian embassy, where after languishing for more than a week, she was found by Slim and Kyra. The half-orc joined in their escape from the embassy and followed them back to Zellara’s home under the pale light of dawn.

Ser Irabeth struck up a fast friendship with fellow paladin Ser Arlynn and joined the party in their investigation of the Hospice of the Blessed Maiden and the hidden Urgathoan temple below. She participated in the final battle against the undead Lady Andaisin and witnessed Iomedae’s holy light cleansing the room of Pallid Princess’ stain.

Irabeth subsequently pledged herself to Arlynn’s cause and joined the part in venturing into Old Korvosa, where she slugged it out in a game of Blood Pig, bisected a rakshasa beneath the Arkona Palace, and resisted a symbol of insanity in the Vivified Labyrinth.

After their escape from the city, Ser Irabeth was reunited with her divine mount Princess. The paladin accompanied the Crimson Blades on their trek north into the Cinderlands to seek the aid of the Shoanti barbarians in deciphering the riddle of Ileosa’s newfound power. Along the way, the half-orc became a champion sredna player, was inducted into the Sklar-Quah tribe, and received marriage proposals from both Krojun Eats-What-He-Kills and Content Not Found: sefa.

After the Shoanti revealed the true source of Ileosa’s power in the relics of Kazavon, Irabeth gladly fled her suitors to join the party on their expedition to the haunted Castle Scarwall. It has been a turbulent adventure for the young half-orc, who jousted with a nightmare knight, saw Princess killed by a dragon, and was reunited with her revived divine mount weeks later. 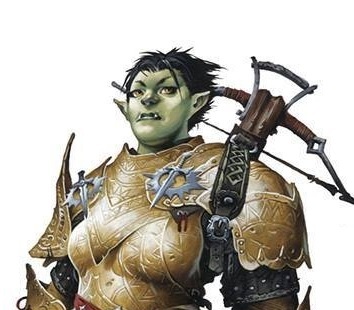