A Vudran man of about 30 with dark hair and kindly brown eyes, dressed in the white and gold robes of Abadar

A low-ranking priest of Abadar, Ishani Dhatri tried to treat the sickly Brienna Soldado without violating his order’s tenets to charge for magical healing.

Unfortunately, his herbal skills were unable to overcome the mysterious disease gripping the child and the party was forced to intervene to save her.

Ishani subsequently coordinated with the party in their efforts to combat the Blood Veil. After their grisly discovery aboard the wreck of the Direption, Ishani cast speak with dead on the body they recovered and provided insights on the plague doctor’s gear.

After assisting the party at the Hospice of the Blessed Maiden, Ishani worked with Zandu to help develop a cure for the plague based on the notes recovered from Davaulus and the Urgathoan temple. Working with Slim and Vittora, Ishani also discovered the likely cause of the immunity that some Varisians exhibited towards the Blood Veil.

Ishani tends to be more generous towards the less fortunate than Abadaran doctrine typically approves of, which may explain why he remains such a low-ranked cleric in the Bank.

After the party left the city, Ishani went missing and was feared dead somewhere within Castle Korvosa.

The adventurers confirmed this fate, freeing his soul from enslavement in the Akaruzug construct. 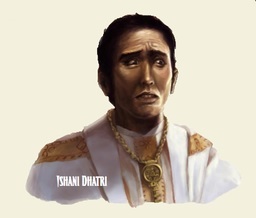