A despotic blue dragon who once held sway from the Cinderlands to Ustalav, reigning from his fortress of Scarwall.

He was slain eight hundred years ago by Ser Mandraivus of Lastwall, but fragments of his soul lingered on in seven seemingly-indestructible pieces of his remains. The fragments were separated and hidden by Mandraivus’ companions, including a Sklar-Quah shaman who hid the dragon’s fangs deep within the Grand Mastaba upon which Castle Korvosa now sits.

It is believed that fragment of Kazavon’s soul that lurks within the fangs has taken hold of Queen Ileosa, who has fashioned the teeth into a crown granting her immense mystical power.

Slim suspects that the fangs were the source of Salvator Scream’s disturbing visions. The party now thinks that there may be a connection between Kazavon and the Church of Zon-Kuthon.

This connection was confirmed by Laori Vaus and Shadowcount Sial, members of the Brotherhood of Bones, who revealed that they are on a quest to retrieve Kazavon’s fangs for their church. 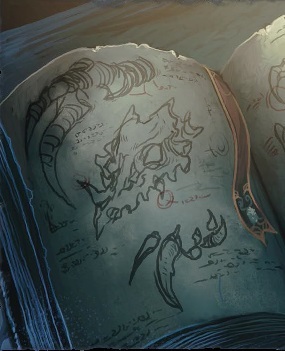