Daughter of Alek Farima and elder sister to Arlynn, Keris shares her sibling’s looks and build, but carries herself with an air of contempt for those around her.

The party encountered Keris selling slaves in the marketplace of Kaer Maga. She challenged Arlynn to a duel in the Circle of Iron, but was bested by the paladin. She was taken prisoner by the Crimson Blades.

After questioning Keris about the slavers’ operations, Arlynn ultimately released her and returned her sword—but only after placing a mark of justice upon her. Keris also revealed that she believed she’d acted to save the family, whose underground anti-slavery efforts had already been discovered by the Master of Whips. Relations between the sisters seem to have improved, though Keris still insists she’d be happy never to see her little sister again.

However, Keris reappeared in Korvosa to alert Arlynn that a crew of Bekyars had infiltrated the city, led by the Master of Whips. Although Keris had hoped to avenge their mother, Arlynn instead bargained with the Master to gain access to a relic that might save Korvosa, as well as releasing several thousand slaves. 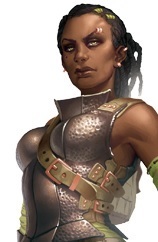