A towering Shoanti warrior whose rippling muscles are bedecked with tattoos

A brash young hero of the Sklar-Quah, Krojun arrived at the Kallow Mounds as part of an honor guard escorting the body of a deceased Sklar-Quah warrior for burial. Upon discovering the Crimson Blades’ presence among the graves of his ancestors, Krojun challenged the tshamek to a game of sredna.

The barbarian hero defeated Zandu, Slim, and Arlynn, but praised them for accepting his challenge. Irabeth, however, bested him at his own game, deeply impressing and perhaps frightening him.

Krojun has pledged to tolerate the party’s presence at the Kallow Mounds and looks forward to seeing their mettle tested further in the Cinderlands.

Krojun encountered the party again at the Acropolis of the Thrallkeepers, where he chastised them for waking the thing beneath the waters. He scoffed at the idea that they were trying to lose their tshamek status.

The party next encountered Krojun at the Flameford camp of the Sklar-Quah, where he gave both Ser Irabeth of Lastwall and Ionas “Slim” Tils the stink eye. The massive warrior grew furious when the Sun Shaman not only pronounced the Crimson Blades no longer tshamek, butalso promised to welcome any who passed the Trial of the Totems into the Sklar-Quah. Krojun and several burnriders, including Sefah, rode off angrily out of the camp. 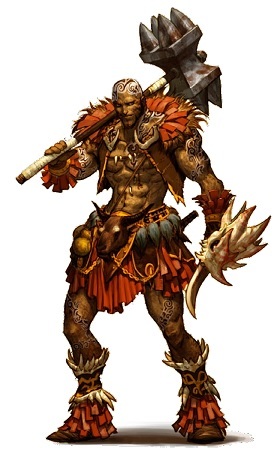