A lieutenant in the Cerulean Society, the official thieves’ guild of Korvosa, Kyra operates out of the Sticky Mermaid tavern in Old Korvosa and can also be reached at Twitcher’s in the Shingles. She is an enthusiastic believer in the Society’s system of “regulated crime” and will gladly talk the ear off anyone who inquires about it.

The party met with her to get information about the Iron Fists. She was also amenable to Zandu’s offer to bring some more family members to join the guild.

It was Kyra who introduced Slim to the rest of the party.

Kyra’s late father was a sailor and through him she managed to pick up a bit of nautical knowledge that has come in handy now and again. Her grandfather fled Cheliax once the Thrice-Damned House of Thrune took over; her kinsmen who remained behind were enslaved. She has no desire to see slavery spread to Korvosa.

Kyra knows something about the Bekyar slavers, but was reticent to share the information in the Sticky Mermaid. She later caught up with Slim to clue him in on what she knows.

Kyra was trapped behind the quarantine of Old Korvosa, caring for her elderly mother Yamyra, until Slim’s arrival facilitated their escape. Her time on the mainland hasn’t lasted long, however. After integrating Zandu’s cousins into the Society, she ventured back into Old Korvosa with the party to act as a guide.

After skewering the Emperor of Old Korvosa and avenging Smalltown, Kyra took her leave of the party to return to her post on the mainland—but not before giving Zandu a kiss and promising to help him finish his book.

Kyra reunited with the adventurers not long thereafter, joining them in fleeing the city.

She accompanied the party throughout their adventures in the Cinderlands. She escaped the tentacled clutches of a havero and took part in the adventurers’ right of passage to join the Sklar-Quah.

After growing closer to Zandu, Kyra went on a killing spree when the sorcerer was struck down by Red Mantis assassins at the Flameford. She was glad to have him reincarnated but dismayed that he was reborn into the body of a gnoll.

The halfling nonetheless stuck with the party on their trip to the haunted castle of Scarwall, where she was happy to play second fiddle to Slim—right up until the Varisian rogue got himself killed.

Since then, Kyra has had to step up as the party’s main rogue—demanding some new equipment along the way. And although Zandu’s new form has no appeal for her, she still holds out some hope that a future relationship with the sorcerer might be possible.

During the battle against the worm devil Sermignatto, Kyra risked her life to save Irabeth after the half-orc had pushed her out of harm’s way earlier in the fight.

During the drawing of the Harrow Deck of Many Things, Kyra was impressed with Zandu’s decision to reject the marriage proposal from a comely marid genie. The halfling used her own drawn to rewrite history in order to protect Irabeth and then drew The Keep, creating a castle across the Jeggare River from Old Korvosa.

Kyra subsequently participated in the party’s assault on the Sunken Queen. Afterwards, she was distraught at Zandu’s disappearance at the hands of the marids, but stuck with the party as they tracked down Nox and the stolen Crown of Fangs. 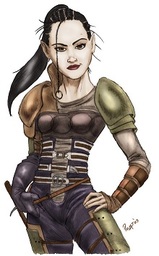