A bubbly elf woman in hooked chain mail, dark of hair and dark of eye, with the brightest smile this side of the Inner Sea

Laori is a most unusual priestess of Zon-Kuthon, spreading his message of pain and darkness with a bubbly, cheerful attitude (and hand-made pamphlets). The elf maiden was raised in Riddleport in northwest Varisia, but journeyed to Nidal to study the Midnight Lord’s teachings.

The party encountered her in the home of Salvator Scream, where she invited them in and offered them lembas.

Laori explained that she was trying to contact the notorious artist because of the strong Kuthite themes in his work. She had tracked down six other artists in Korvosa who appeared similarly touched by “ZK,” but they had all committed suicide before she could reach them.

Laori partnered with the adventurers to rescue Salvator from the so-called Emperor of Old Korvosa. She also provided them a clue she had found in the artist’s home—a bloodstained patch from the uniform of the missing seneschal of Korvosa, Neolandis Kalepopolis.

(Laori has also written a Zon-Kuthon jump rope song, which is collected here.)

After helping coin the name “Team Super Blood Explosion,” Laori helped the party play Blood Pig and then joined them in defeating the Emperor of Old Korvosa and his little gnome, too.

Following the rescue of Salvator Scream, Laori questioned him privately about the details and specifics of the gruesome dreams that had inspired his visions. She was disappointed that he had lost his muse and wanted nothing to do with his later work. However, she eagerly purchased the three original Scream paintings that the party salvaged from the Emperor’s palace.

Promising to escort Salvator to safety, Laori reluctantly took her leave of the party to report her discoveries to her church superiors. She planned to stay in touch with Slim via sending and seemed confident that she would see them all again someday.

The party reunited with Laori on the outskirts of Castle Scarwall, where she had traveled to meet them along with fellow Kuthites Shadowcount Sial and Asyra. Since then, Laori accompanied the party in their investigations of the castle and helped them supplement their foodstuffs with more of her baked treats.

However, she became the target of Mithrodar, with the chain spirit attacking her psychically in an apparent attempt to turn her into a replacement spirit anchor.

Laori was distraught at the death of her friend and studentSlim, and claimed that she always ultimately loses her friends.

The partnership between Laori and Sial gradually deteriorated as the party plunged deeper into Scarwall, with the two ultimately coming to blows in the Star Tower. Although she emerged the victor with help from the Crimson Blades, Laori turned down an invitation from Ildervok to travel to Zon-Kuthon’s palace on the Plane of Shadow to testify against Sial.

Since then, she has been experiencing a more distant connection with ZK, to her great distress. This was exacerbated in Castle Korvosa, when the horned devil Mavrokeras stole her spiked chain, which seemed another sign of her god’s disfavor.

When she retrieved a Gray Maiden’s sword to replace the weapon, however, she found that it glimmered with the light of Iomedae. Laori used the sword to behead Mavrokeras and retrieve her chain, but in the interregnum she seems to have drifted further from ZK’s dark path.

Laori joined the party in their confrontation with Ileosa at the Sunken Queen and their subsequent pursuit of Nox after he absconded with the Crown of Fangs. When Arlynn destroyed the crown, Laori recovered the fangs and placed them in a waiting container. After this, the elf priestess grew subdued and withdrawn.

One morning she simply vanished with no warning or farewell. However, the goddess Iomedae told Arlynn that neither Laori nor the fangs would return to Nidal. This prophecy proved accurate, when the elf maiden reemerged during the Breaching Festival, pursued by her vengeful shadow.

She has broken with the Midnight Lord and returned the fangs to the party for safekeeping. She revealed that her sect within the church, the Brotherhood of Bones, was dedicated to recovering the relics of Kazavon in order to resurrect him. That was a cause she no longer believed in.

Although she proudly stands with her friends, Laori has renounced her connection to Zon-Kuthon and with it, her access to divine spells. 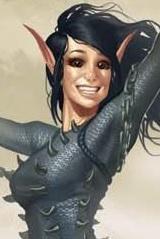