Devargo’s long-suffering “pet” pseudodragon, Majenko was rescued from the sinking wreck of Eel’s End by Ashla Blacktree and subsequently swore to serve her for a year and a day.

The party has made use of Majenko as a rapid messenger, though he has also contributed in battle.

After sitting out the party’s expedition to Scarwall, Majenko has reunited with Ashla for their return to Korvosa. 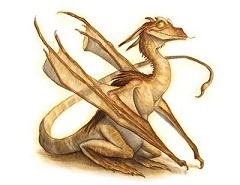