An overlord of the Bekyar Nation

One of the Seven Great Masters of the Bekyar Nation, the Master of Whips is responsible for slave raiding and slave trading. Like most high-ranking bekyars, he is a demon worshiper and is rumored to have made pacts with demon lords themselves to grant him unholy boons.

A decade ago, the Master of Whips was investigating an underground network of slave liberators when Keris Farima came to inform him of her parents’ plans to free thousands of slaves. Though the girl hoped she would spare her family the Master’s wrath, during the preemptive strike the Master of Whips batted Arlynn Farima aside and slew her mother. The rest of the Farimas fled, while Keris stayed behind and was showered with accolades for her loyalty.

The Master of Whips continued to organize a pursuit to hunt down and eliminate the fugitive Farima family, chasing them across the Inner Sea. The Master has also been the figure behind the Bekyar’s recent expansion of their slave trade into Varisia through Korvosa.

The Master of Whips has recently arrived in Korvosa, with a small crew of elite Bekyar fighters. When confronted by Arlynn and Keris, he claimed they were there to retrieve the stolen Book of Golgothus, a text of forbidden planar lore that their auguries foretell will be used to bring disaster to Korvosa. The Master wants the text back, and has an interest in preserving the city since its destruction would inconvenience his plans.

Arlynn eventually struck a bargain with him: the Crimson Blades will help retrieve the book from the Acadamae if they are allowed to study it for clues to thwart the coming doom and if the Master frees the same number of slaves that her parents were about to liberate the night of the attack. The Master agreed to these terms and had them placed in writing.

Arlynn has since learned that the Master of Whips freed the agreed upon slaves, but had them driven out into the wilderness beyond the Bekyar Nation, where they were told to head north for Sargava.

The paladin has also uncovered a dark secret about the Master of Whips—that he is no man at all, but in truth a Treachery Demon in disguise. 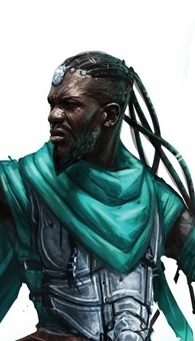