Bristling with terrible spines and a crown of deadly horns, this leering winged terror wields a whirling barbed chain

A horned devil in league with Queen Ileosa according to Sabina, who warned the party of his presence in the castle. They encountered Mavrokeras on the first floor of the castle during Togomor’s ambush attempt.

The devil sorely wounded Ashla and shrugged off most of their attacks, but was forced to flee after the tide turned against his minions. He took with him Laori’s spiked chain.

The party tangled with the horned devil again during the battle in the throne room, but once more he escaped, much to the frustration of both Laori and Irabeth.

Mavrokeras appeared for a third and final time in the royal bedchamber, where he battled with the party to honor some debt to the worm devil Sermignatto. After Sermignatto’s death, Mavrokeras attempted to flee but his escape was blocked by Arlynn and Nox, giving Laori time to behead him. 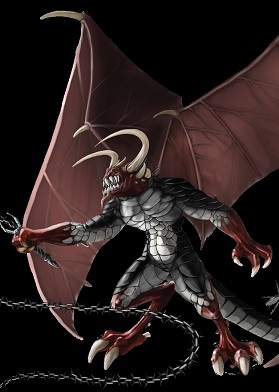