A starkly beautiful priestess of Asmodeus

Mina was the Asmodean priestess overseeing the Temple’s role in matching Korvosan nobles with halfling laborers from Cheliax, operating out of a vault beneath the Temple. The party revealed that the unfair contracts the laborers had signed were being back-dated in order to give the impression that they had been signed in Cheliax, where the Asmodeans can legally witness binding agreements.

Mina was last seen being hauled off by the Hellknights for punishment. 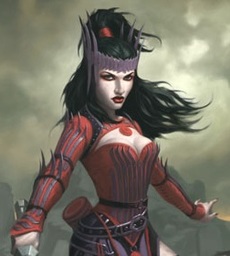