A broad-faced, heavyset man with dark hair graying at the temples

The Seneschal of Castle Korvosa for many years under King Eodred II, Neolandis vanished within hours after the king’s death and has not been heard from since. It was Neolandis who hired Trinia Sabor as the king’s portraitist.

Like all past seneschals, Neolandis was previously the Commandant of Sable Company. His friend and protege, Marcus Endrin, was slated to succeed him until the younger man’s untimely death at the hands of the Queen.

A bloodstained scrap of cloth from Neolandis’ uniform was discovered in the home of notorious local artist Salvator Scream.

Neolandis had secretly befriended the artist and fled to his house to lie low while he recovered from the injuries he’d suffered at the hands of Red Mantis assassins the night of the King’s death. Eventually, Salvator persuaded Neolandis to take refuge with House Arkona.

According to Lord Glorio Arkona, the missing seneschal is somewhere within the Vivified Labyrinth beneath the Arkona Palace, along with Vencarlo Orisini, who had tried to rescue him.

With help from Vencarlo, the party was able to free the missing seneschal from the Labyrinth and escape with him across the river. After journeying to the village of Harse to regroup, Neolandis tells the party what he has learned: that the Queen murdered her husband (and possibly his secret bastard brother), that Ileosa has apparently fallen under the influence of some sort of relic known to the Shoanti as Midnight’s Teeth, and that the only ones who know how to defeat the artifact are the reclusive tribesmen themselves. Per Ashla’s questioning, Neolandis says that he who hired Trinia to paint the King’s portrait due to both her genuine talent and his hopes that the beautiful artist might rekindle Eodred’s lust for life.

After pointing the party towards the likeliest site of Thousand Bones’ camp, Neolandis prepares to leave for Janderhoff, accompanied by Vencarlo and Trinia. 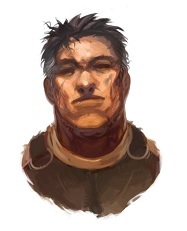