A thin, scabrous man in threadbare robes with a cheap, gold-foil crown perched crookedly on his oily head

A strange figure who has bent the gangs of Old Dock to his will, he has taken over a large stretch of Old Korvosa, where he reportedly rules with an iron fist. Those who displease him at executed by the “Tall Knife,” a Galtian device for swiftly and efficiently removing the head from the body. A Tall Knife was on display at Exemplary Execrables, before the grotesque theatre/museum burned down in the early ddays of the quarantine.

According to Laori Vaus, the Emperor has captured the artist Salvator Scream and is holding him at his “palace” in the slums of Old Dock.

According to Lord Glorio Arkona, the Emperor is a man named Pilts Swastel, the former proprietor of Exemplary Execrables.

The party confronted the false Emperor at his palace in Old Dock, where they pummeled him with sword and spell until Kyra struck the final blow. 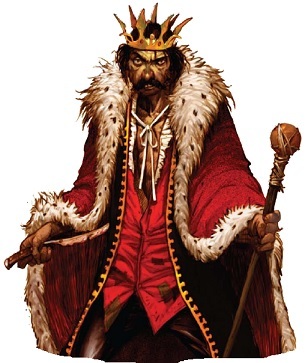