A half-orc druid with a fiery temper

The former leader of the Brackwater Druid Circle, Qoro founded Korvosa’s first organized druid society years ago but has accomplished little since then beyond annoying his neighbors.

Egan exposed him as an ineffectual leader who was taking bribes from the Goldlager tavern in Magnimar to harass its Korvosan rival, the Posh and Turtle.

Qoro’s son and former apprentice, Akko, eloped with a dwarven blacksmith apprentice named Thenra, taking most of the bribe money.

Qoro resurfaced a few weeks later, attempted to challenge Egan to a duel before being talked down into admitting that he was just looking for someone who could help him get the bribe money back to the Goldlager. An embarrassed Akko and Thenra trailed after him.

The half-orc druid also revealed that he had worked with Egan’s father Madrick Silentall and identified Lord Glorio Arkona as the person holding Madrick’s amulet. 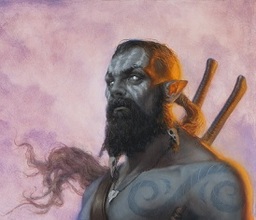