A skinny young woman of mixed Chelish and Varisian heritage

A rookie guardswoman, she was paired with Grau for an investigation into the priest disappearances and found herself roped into the party’s expedition into the sewers. She shared in the reward money for capturing the remaining Cow Hammer Boys.

As a rookie, Remmy often served as a go-fer for the Korvosan Guard, fetching the party and relaying messages. She was also investigating the mysterious deaths around Pestico’s toy shop, which ultimately proved to be the work of the Soulbound Doll Nathaly’s overzealous protection of her “papa” from Devargo’s thugs.

Upon learning that the Gray Maidens were paying recruits nearly twice her Guard salary, Remmy joined the new all-female force in order to better provide for her ailing parents.

The party encountered a much-changed Remmy at the Hospice of the Blessed Maiden, where she and the rest of her squad of Gray Maidens crossed swords with the adventurers. Together, Ashla and Irabeth managed to knock her unconscious.

Upon removing her helmet, they discovered that her face was a mass of scars and she was missing an eye, the result of deliberate torture. She remained fixated on serving the Queen, but the party convinced her that Dr. Davaulus and the Queen’s Physicians had betrayed her sovereign.

After assisting the party in their battle with Rolth, Remmy was sent back to the Guard relay what she had learned. Cressida Kroft has convinced the young woman that she has been made the Gray Maidens’ official liaison to the Guard, keeping her safely out of the hands of the Queen while they try to find some way to free her from the indoctrination. The party helped cover for her disappearance, telling a concerned Sabina Merrin that Remmy had been slain by Rolth.

Despite her mistreatment, Remmy remains upbeat and prone to cracking terrible jokes about her missing eye.

At Cressida’s request, the party smuggled Remmy out of Korvosa and have taken her with them on their quest into the Cinderlands.

Remmy participated in many of the Crimson Blades’ adventures there and along the way developed a strong bond with Slim. Upon learning that Queen Ileosa was possessed by the spirit of a powerful, long-dead dragon, she urged the party to save the Queen. Slim pressed upon her the need to overcome the threat to Korvosa, even at the cost of Ileosa’s life, and Remmy ultimately relented, though she still doubts whether she can raise a hand against the monarch herself.

When the party bivouacked outside Castle Scarwall, gentle prodding by Laori revealed that Remmy had been tortured and conditioned by erinyes. The former guardswoman explained that she grew suspicious of how Maiden trainees would vanish for their final training and tried to escape to alert the guard, only to be caught and disciplined—a punishment that she is not entirely certain was unearned.

As the party scoured the halls of Scarwall, Remmy did her best to stick by Slim, but the two of them had some close calls—until the fateful run-in with the danse macabre cut the rogue’s life short. She now wears his bloodstained kapenia scarf tied around her left arm and is determined to honor his memory.

Upon returning to the city, Remmy played a role in rallying a faction of repentant Gray Maidens to the side of the rebels. She then joined the party in their efforts to track down Nox and the stolen Crown of Fangs.

Upon returning to the surface, she has stuck close to Nox, and also continues to guard the replica medallion, including defending it from a theft attempt. 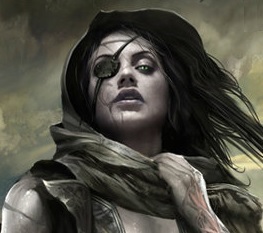