Brother of Deyanira, he is an up and coming ocarina player

A prodigy with the ocarina, Ruan lives with his sister Deyanira in a modest apartment near the Marbledome opera house where they both work. He got his first big break when he was selected to perform for a masquerade party at Carowyn Manor in South Shore, but he hasn’t been seen since.

Ruan was taken below the Hospice of the Blessed Maiden to be experimented on by Ramoska Arkminos, a nosferatu who hoped that Ruan’s strange resistance to the Blood Veil could hold the key for curing other supernatural maladies, such as vampirism.

Ashla bought Ruan’s freedom for the price of 2,000gp and the young musician is now recovering in the upper story of the hospice with the other victims. 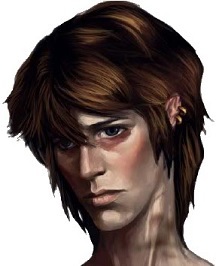