An athletic, raven-haired beauty with steely eyes and a single scar on her right cheek

Queen Ileosa’s handmaiden and bodyguard, she was a prize student at Vencarlo Orisini’s fencing academy until some sort of scandal forced her out. When Zandu made a pass at the Queen, Sabina was visibly seething.

Sabina was the one who took custody of Trinia Sabor from Cressida Kroft and the party after the young artist was captured, enforcing the Queen’s commands. Sabina has been placed in charge of the Gray Maidens, the all-female guard force created by the Queen, and was recently made General of Korvosa.

Sabina inquired after the missing Remmy and was told (falsely) by the party that the young guardswoman had perished in the Urgathoan temple.

Remmy later claimed that Sabina did not participate in the same training and indoctrination as the rest of the Maidens, but insisted that she was a caring and inspirational leader.

Gossip around town is that Sabina’s relationship with Queen Ileosa is more than professional, a rumor that Neolandis confirmed, describing Sabina as hanging off the Queen’s every word.

The party confronted Sabina when she engaged them on the back of a black dragon—but she rapidly switched sides to help them defeat the dragon before throwing herself on the party’s mercy. She believes that the queen has gone off the deep end and no longer loves her—and may never have loved her.

Sabina told the adventurers she wanted to help undo some of the damage she has caused. She provided them with information about Castle Korvosa and volunteered to lead a diversionary attack on the Gray Maiden headquarters at the Longacre Building. 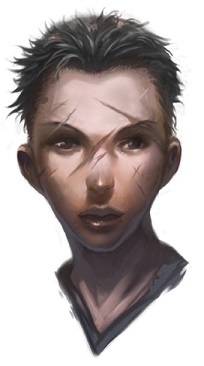