A tall man with stark features and long white hair, dressed in a spotless red hakama

A Shadowcount of Nidal, the party encountered Sial in the Acropolis of the Thrallkeepers, together with his companion/bodyguard Asyra. The priest of Zon-Kuthon described himself as an associate of Laori Vaus and said that divination magic had led him to the party’s destination.

He claims to be simply observing them to confirm whether they are involved in events of significance to the Church of Zon-Kuthon.

Sial and Asyra assisted the party during the Red Mantis ambush at the Acropolis. The Shadowcount subsequently negotiated a longer-term alliance with the Crimson Blades so that he can observe them during their quest.

Sial is the owner of a portable fortress made of bone, which he has permitted the party to rest in during their travels.

After witnessing their triumph over the Cindermaw, Sial and his companion Asyra departed for Nidal only to reappear weeks later in the company of Laori Vaus. The Shadowcount and the elf maiden jointly revealed that they are part of a Kuthite order, the Brotherhood of Bones, with a mission to retrieve the Fangs of Kazavon for the Church.

Since the fangs are currently granting Ileosa vast power and nigh invulnerability, the Kuthites have struck up a partnership with the Crimson Blades. They will help the adventurers retrieve the sword Serithtial, the only weapon capable of defeating the queen and sundering the crown of fangs, if they are permitted to return the relics to Nidal.

Sial’s rigid aristocratic personality does not mix well with Laori’s cheerful exuberance and the two seemed to have difficulty getting along. 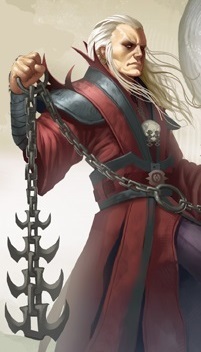