The Shaman of the Shoanti encampment at the Flameford, he has a distinctive fire-shaped tattoo that climbs up the right side of his chest onto his clean-shaven face.

The Sun Shaman heard Truthspeaker Akram’s account of the party’s encounter with the Cindermaw and agreed that the adventurers were no longer tshamek. But he refused to share any information about Midnight’s Teeth with them as that knowledge is only for the Sklar-Quah.

At Slim’s prodding, he allowed—with a look of amusement—that any of them who pass the trial of the totems will be welcomed as honorary members of the Sklar-Quah with whom he could speak about the clan’s history. 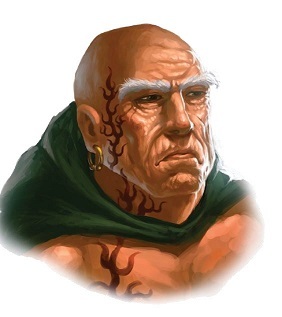