A grotesquely obese wizard of the Acadamae

A senior faculty member of the Acadamae, he has quickly ascended to Queen Ileosa’s inner circle as an adviser on matters arcane.

Togomor was recently appointed the new Seneschal of Castle Korvosa, a sharp break with the traditional practice of naming the head of Sable Company to the post.

Togomor was the party’s first target during their incursion into Castle Korvosa, but rather than the wizard himself the party found themselves battling an illusory double whose magic was all too real. After dispelling the illusion, the adventurers raided his apartment, capturing his spellbooks, including his notes on Ileosa’s plans for immortality and his strange sketches of a slug-like devil with three heads.

The party tangled with Togomor again in the throne room, where the wizard stayed invisible while casting spells in support of the false Ileosa and the horned devil Mavrokeras.

The Crimson Blades finally cornered Togomor in the royal bedchamber, where Arlynn lopped off his head—a surprising expression of relief on his face as it went spinning past. 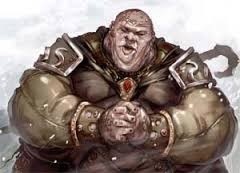