Sister to Marcus and Telus

A scion of House Endrin and the younger sister of Marcus and Telus, Valeria followed her elder brother into Sable Company. However, when Queen Ileosa announced the formation of the Gray Maidens, Valeria resigned her commission to join the new order of warrior women.

Like the rest of the Gray Maidens, she was tortured and brainwashed to be completely obedient to the Queen. She continued to loyally serve even after Ileosa slew her brother Marcus and remained committed to the Queen’s cause even as the tide turned against her. Only after the defeated Ileosa called on her followers to lay down arms did Valeria cease fighting on her behalf.

Her dedication to the Gray Maiden loyalists has left her estranged from her surviving brother Telus, but with the two of them left recently orphaned, they are attempting to mend relations.

Faced with two identical versions of her brother, Valeria went with the one who had scryed on her as the authentic one.

Having picked which Flint to trust, she has continued to support him against his other duplicates and their efforts to tarnish her reputation. She also recently learned that Flint’s longtime friend Damon Forscythe has feelings for her.

Valeria participated in the defense of Korvosa against Lorthact’s depredations. After learning the truth of what happened to her brother, she assumed her role as head of House Endrin 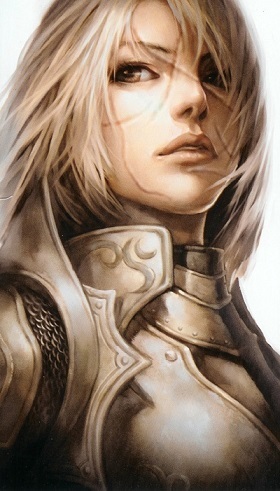