According to Neolandis Kalepopolis, the late King Eodred II Arabasti had a bastard brother whose existence was kept a secret known to a very few within Castle Korvosa. Venster went missing a short while before the King himself died.

Egan recently experienced a strange dream in which he seemed to relive a moment fromVenster’s perspective, as Ileosa seduced the tiefling into poisoning his younger brother.

The party encountered Venster’s ghost in his secret attic chambers, where he promised to help them in exchange for retrieving his bones from beneath the Castle.

After the party discovered his remains behind a walled-up chamber in the Thassilonian level below the keep, Venster’s spirit manifested once again. He confessed his role in Ileosa plan to murder his brother and admitted that his guilt has kept his soul bound to the castle until she is stopped. He tells the party that Ileosa is plotting to use the powers within the Sunken Queen to engage in a blood magic ritual that will sacrifice hundreds of innocent souls within the city in order to grant her immortality.

He urges the party to investigate “Mother’s Tower,” a secret sanctum in the Castle used by the Arabasti family, where Ileosa had often retreated to before her strongest bursts of ambition and power.

Ventser and Zellara then drew upon the powers of Zellara’s Harrow Deck to channel the wrath of the souls of Ileosa’s victims into a new artifact, the Harrow Deck of Many Things. With that, his spirit left the mortal realm. 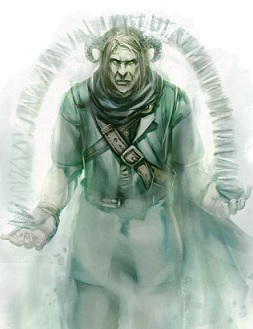