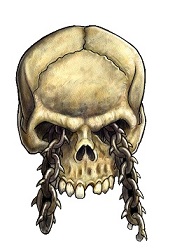 The god of darkness, envy, loss, and pain, Zon-Kuthon was once the half-brother of Shelyn, the goddess of beauty. But his envy for her talents drove him on a journey past the edge of the Great Beyond. There, he encountered some terrible alien entity that remade him into a god of suffering.

The height of Zon-Kuthon’s power on Golarian came thousands of years ago during the Age of Darkness, when the sun vanished from the sky, the elves fled to a different plane of reality and great civilizations crumpled into dust. It was during this time that he made his fateful pact with the chieftains of Nidal, ensuring that he maintained a foothold on Golarion even after the Age of Darkness came to a close.

While others employ pain as a tool, for the followers of Zon-Kuthon the giving and receiving of ever-increasing agony is an end unto itself. The Midnight Lord’s horrid affection attracts evil sadists, demented masochists, and those whose spirits are so wounded that only overwhelming pain distracts them from their sorrows.

Zon-Kuthon’s unholy symbol is the skull and chains.

The Midnight Lord has an ill-tended shrine at the Pantheon of the Many, though as with other evil deities his faithful are forbidden to sacrifice sentient beings within the city. Followers of Zon-Kuthon in Korvosa include: