His wild hair and bushy mustache conceal a rather average face

The young head of House Arkona. Unlike his more reclusive forebears, Lord Glorio frequently leaves the family compound to tour Old Korvosa, passing out sweets to poor children and silver coins to their parents. He has swiftly cultivated a reputation as one of Korvosa’s leading philanthropists—which helps offset the rumors that he also maintains strong ties to the city’s criminal elements.

The party spoke with Glorio briefly at one of his urban renewal projects in Old Korvosa. He promised to help track down how the Iron Fists paid for their passage to Korvosa. He also revealed that his cousin Vimanda Arkona has been missing since shortly after the king’s death. He had been working with Devargo Barvasi to try to find her, until the latter’s demise.

Glorio is currently trapped behind the quarantine of Old Korvosa.

The party approached Glorio to get his blessing and support for ousting Pilts Swastel, Emperor of Old Korvosa. The artis Salvator Scream warned that the Arkonas were holding both Neolandis Kalepopolis and Vencarlo Orisini prisoner.

After rewarding the party for removing the Emperor, Glorio admitted that the two men were his guests, but explained that they were stuck in the moving dungeon known as the Vivified Labyrinth, deep beneath the Arkona Palace. As a further complication, Glorio and his men had recently driven the rakshasa posing as his cousin Vimanda down there.

In the Labyrinth, the party encountered Vimanda, who claimed to have been trapped there by a rakshasa posing as Glorio. The party proved unable to determine whether either of them was a rakshasa (though they did learn that both were Evil) and after a brief stand off, the party returned to the Labyrinth while Vimanda fled and Glorio remained sealed in his chambers. 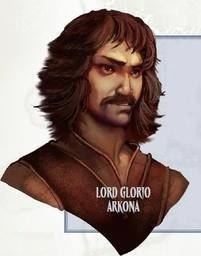