An attractive Varisian woman in her early 40s, with long dark hair

A Varisian fortuneteller, Zellara and her son were murdered at the hands of Gaedren Lamm. Her spirit remains connected to her Harrow Deck and she is committed to helping the party save her city from a coming darkness she has seen in the cards.

Zellara performed a Harrow reading for Egan and Zandu (Arlynn and Ashla abstained). During the Choosing, Zandu drew the Locksmith, while Egan drew the Crows.

Zellara helped the party identify the silver dagger as a Raktavarna.

After the party cured Brienna Soldado of a mysterious disease, Zellara manifested in her home to perform another Harrow reading. Her cards portrayed a city hypnotized by falsehoods and faced with a danger that could threaten many lives. A slender hope remains, but it may require great sacrifice to accomplish.

Zellara continued to guide the Crimson Blades throughout their adventures, her Harrow Deck carried by Zandu.

Deep below Castle Korvosa, when the party encountered the ghost of Venster Arabasti, Zellara realized that her time on the material plane had come to an end. She and Venster used her Harrow Deck to channel the spirit energy of all of Ileosa’s victims to create a new artifact, the Harrow Deck of Many Things, to aid them in finally defeating the Queen. After delivering a final ectoplasmic kiss to Zandu for carrying her all this way, she faded from view and passed beyond the mortal realm. 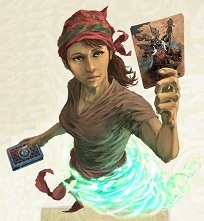